No replacement, miscarriage and a 3 Year Old...

It's been so long since I've written anything on this page, I even forgot my password!!! Luckily I figured it out, so it's time for an update!

Going all the way back to April, my doctors decided that even with all of my shoulder pain, a replacement would be a bad idea. Unfortunately, shoulder replacements don't last as long as other joint replacements and when one wears out, another has to take its place. Every time you replace a joint, you have to cut away at some of the existing bone and the more often you have to replace a joint, the more the bone is cut away and ideally I'm going to live long enough that I'd take the chance of cutting away too much bone until nothing is left to work with. You also take the chance of losing a little mobility every time you have surgery, something I'm already having trouble with. So it was recommended that I take it easy, don't lift too much and keep my shoulder as loose as possible. Keeping my mobility has been tough but taking a break from lifting did help with some of the pain. For now I'm trying to keep as much mobility as possible and eventually I'll be working with a physical therapist to retrain my muscles and ideally gain even more mobility. Easier said than done but I'll get there.

Even with all of my shoulder issues, my husband and I decided to try for baby #3 this past September. The transfer was successful but sadly I had a miscarriage in early November. Nothing traumatic happened, the baby simply stopped growing. I knew something was wrong pretty early on but we kept holding out hope. My HCG counts weren't increasing as quickly as they should have and by our second ultrasound we realized the embryo stopped developing. It hit harder than I expected but we're doing better now. It was a long process but fortunately I didn't have to have surgery this time. I had to take Misoprostol, a medication that assists by helping the tissue pass more quickly. I had to take it twice because some of the tissue didn't pass the first time but eventually it did it's job and I didn't have to have surgery or stay in the hospital, I was able to let everything pass at home. I was fortunate enough to go through all of it without much cramping and pain but it all took it's toll and drained me of any energy I had. My family was extremely supportive through all of it and helped out even more than usual. We can try another transfer at the end of this month if we want but I think I need more time to recover, work on my mobility and strength and just feel healthy again.

I decided to give Enbrel another try. I've been on Prednisone for about 5 months now and I've had enough of the puffy face, short temper and countless side effects that come along with it. There's always a love, hate relationship when I take Prednisone but unless I'm pregnant, the benefits aren't worth it, so back to Enbrel I go. I've only taken the Enbrel for 2 weeks and I've noticed a little improvement bu I know it will take some time for it to really kick in. I'm still weening off of the Prednisone and it's going to take longer than I'd hoped. My doctor wants me to take a full 4 months to ween off of it...not going to happen but I'll take it slow so I don't completely crash and burn. I'll probably ween off of it in time for another embryo transfer and have to start the Prednisone again but even a tiny break from it is appreciated.

On a more positive note, my little man turned 3, I can't believe it!!! We had a great day celebrating with family, friends, Thomas the Train, Lightning McQueen and Minions. He could decide on one theme, so we combined his three favorites. He's trying so hard to gain his own independence but still wants to be the baby as well. He has a hard time balancing it all some days and tests our patience along the way but we're all learning together and trying to keep our sanity as much as possible. He's still the sweetest little guy I know and even the craziest days are worth it...especially when he lets me rock him to sleep. The last few months as a parent have been completely exhausting emotionally and physically but I wouldn't change a thing...we're beyond blessed! 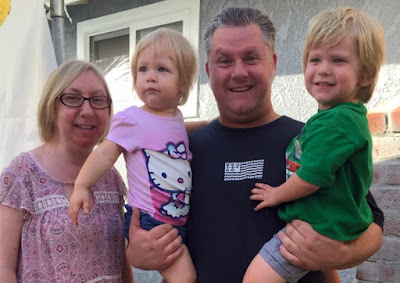